Plans for Towers in Calgary's West Downtown on the Way Up 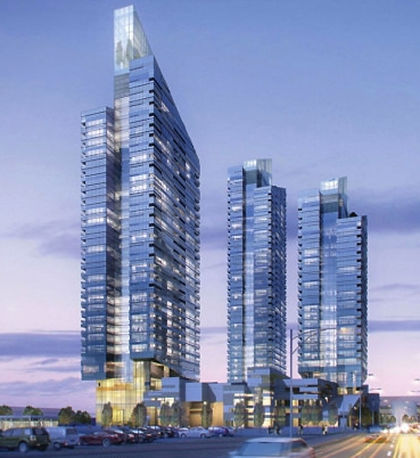 The future of downtown Calgary’s long stagnant west side is looking up — way up.

Thursday, a development permit for a three-tower residential complex — dubbed West Village Towers — will go before the Calgary Planning Commission for approval.

Boasting 584 residential units along with two stories of commercial space, including an urban supermarket, the area councillor said it will become an anchor for a long neglected part of the downtown core.

“The downtown west end is a struggling neighbourhood. “But there’s a whole bunch of things percolating on the horizon.”

Long the home of Metro Ford, the glass panelled high rises are proposed to range in height from 29 stories to 41 stories with several public plazas.

The Calgary Downtown Association also endorsed the proposed development, noting in a letter to the planning commission it will help fill a large rental void in the core’s west end.

“We believe this project to be an exciting addition to the west side of downtown, plus a much needed addition to Calgary’s severely restricted rental accommodation inventory,” wrote CDA executive director Maggie Schofield.

“This project represents a very thoughtful addition to the downtown residential market, and its design remains respectful of both existing residential towers and nearby greenspaces.”

Woolley said the towers are the first step in what he hopes will be a spate of new development in the area that faces hurdles from large swaths of contaminated land, which require pricey remediation.

“There are lots of conversations going on right now,” he said, noting developers have another 2,000 residential units on the books within the next five years.

“In this city we’re really good at building out, we’re less good at building up.”  The project’s developers, Wexford and CIDEX Developments, are hoping to begin construction by the end of the year.